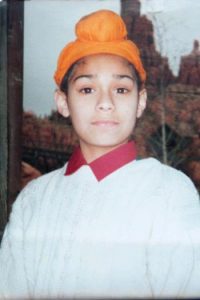 These are the final diary pages of Vijay Singh. Read his true story….

One in ten students said that they had suffered severe bullying which included physical violence. Most of them felt they cannot share their problems and the consistent bullying they faced drove them to depression and misery.

Vijay Singh was a bright 13-year-old boy from Manchester. This child was tormented; his life made a misery and it drove him to taking his life. The reason why this happened was because of intolerance, racism and bullying. Vijay Singh attended predominantly a white school. Most children did not have an understanding of why Vijay Singh wore a turban. Racist boys at school would beat up young Vijay Singh, when going to school, in school and going home. He was half their size, but size did not matter. They would knock his turban off and punch his eyes, so what if he cried they thought.

Vijay Singh good grades made these unintelligent racist children, jealous. They would taunt him, and call him names. Paki! Turban-head! Wrap head ! His lunch would be stolen. The boys would swing their fist in his nose. Bleeding Paki! Bloody Paki! , they would say. Not knowing the pain they caused when his nose went crunch . Blood pouring down young Vijay Singh shirt.

They grabbed his arms, and would push him into to the wall. They would hit him, Punch! Crunch! and he would fall to the ground. They didn’t care how he felt or why he had a turban on his head. Kick! Spit! they would watch him crawling, crying for help. The bullies would walk away leaving young Vijay Singh crying out for help.

The School lessons would begin. For most children lessons were normal, a laugh a giggle as well doing work. However for Vijay Singh this was like a prison cell at the school from hell. He would sit in the class with his blood stained clothes.

Tears would roll down his eyes, and he had a sour broken nose. However the bullies didn’t stop their taunting. They could not feel the pain or see why he should not deserve it. He was brown, he wore a turban, and wasn’t normal. He wasn’t normal.

What is normal? Is everyone single person the same? Someone is clever, someone is good with their hands, someone is fat, or slim and someone is tall or small. We are not all normal. Our abnormality makes us individual, and it represents our background, identity and what we stand are.

No teacher saw this bullying happening. No teacher saw the signs of bullying. No teacher said to this kid, don?t worry, No one said, you are a Sikh, and you are brave and strong…….. No one knew young Vijay Singh plans, of what he had been thinking and going over his mind almost certainly. He opens the door, slams it shut. Runs up the stairs, for freedom calls He escapes from his body walls , and is free at last from the horrific violence, which he had suffered silently. Vijay Singh was found hanging from the banister rail at his home on one Sunday in 1996. This was the silent death of an innocent child who was tormented, and mentally and physically tortured. Where his life ended, we begin, to understand the effects of bullying.

Racism also manifests itself in teachers failing to take racist bullying seriously, even after tragedies such as the suicide of schoolboy Vijay Singh. There are still a huge number of cases of racist bullying, which have been dealt with improperly. The Sikh Helpline were made aware of a case where a secondary school pupil was attacked by a number of other pupils, leaving him with a broken arm. His assailants were left unpunished and continue to verbally and physically abuse him. To maintain order, he has been excluded from socialising at school and has received complaints from teachers for highlighting inadequacies in his treatment.?

Dedicated to Vijay Singh, aged 13, who hung himself at home in Manchester, after being bullied at school.

“Racist ruffian, low-down scum
Foul mouthed thug do you think its fun
To beat up a kid who’s half your size?
Knock his turban and punch his eyes
He gets good grades and it makes you sick
turban-head’s clever and you’re so thick.
You push and punch and steal his lunch
You swing your fist his nose goes crunch
Bleeding Paki! Bloody Paki!
Swear a lot then steal his money
Grab his arms – push him to the wall
Punch! Crunch! He takes the fall
Kick! Spit! Watch him crawl
Walk away from his crying call.
Lessons start at the school from hell
Classroom’s more like a prison cell
Sitting in his blood stained clothes
Tears in his eyes and a busted nose
Bully boys don’t stop their taunting
No teacher saw his daily haunting
No teacher said you’re a lion Singh
Be BRAVE, be STRONG but never give in
School bell rings:”Bye-Bye friends I ain’t coming to hell again!”
Running home as fast as he can
No one knows his secret plan
Up the stairs for freedom call
He escapes from his body walls
Free at last from the violence
Hangs himself in deathly silence.
Where he ends we begin
Bullies won’t kill another Singh
Unite as CHILDREN make the change
Don’t let things stay the same
We want freedom – no more crime
We want freedom all the time
No more Singhs will die this way

Unite as CHILDREN – fight them today!
CHILDREN UNITE
IT’S TIME TO FIGHT
THE BULLY BOYS
THE RACIST NOISE
DON’T LIVE IN DREAD
TELL THE TEACHER INSTEAD
YOU’RE NOT ALONE
LET YOUR TROUBLES BE KNOWN”

At least 1 Sikh student has committed suicide in the UK because of racial abuse.  This issue of racial abuse is present amongst all communities and can affect anyone regardless of religion, colour, caste or creed.  If you know someone who is being bullied, know someone who is bullying someone or need help yourself (as a bully or victim), THERE IS ALWAYS SOMEONE HERE TO HELP AT THE SIKH HELPLINE, 24 HOURS A DAY, 7 DAYS A WEEK. PLEASE CONTACT US USING ONE OF THE METHODS ON OUR CONTACT US PAGE.

The SikhHelpline needs your support

We are here to provide support to young people around the UK deal with various issues. In order to continue this service we need people like you to donate as much as you can spare. Our greatest fear is that when desperate children call our Hotline for help they will find our lines busy and never ring again. To Donate