A young Sikh boy who attending secondary school was being bullied by a group of boys, within this group was a ring leader and other children would follow the bad behavior of this one boy. As time went on the ring leader and all the other children began to bully the Sikh boy, they pushed him around and eventually started to beat him up and were calling him unpleasant names. Throughout his terrible ordeal the young boy remained silent and did not confide in anyone about what was happening to him. However, the young boy decided he could not take anymore of the abuse and eventually built up the courage and informed the school about the bullying, but the school did not take this matter serious and therefore nothing resulted, so the bullying continued. 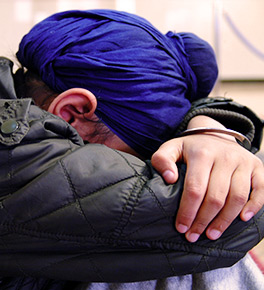 The young Sikh boy endured the bullying over a long period of time and decided he could not take any more of the bullying as a result he walked out of the school vowing that he would not return and no longer wanted to carry on with his education. When he came home and explained to his mother the truth about his ordeal she was shocked and upset with finding out what had been happening to her son. She was also concerned with her son?s decision not to return to school. The mother decided to call the Sikh Helpline for some advice; she explained what had happened to her son and expressed her concerns with her son’s decision of not returning to his education.

The Sikh Helpline advised the young boy’s mother that support was available and there was much that could be done regarding the matter of bullying and also there was support available for the young boy’s decision on his education. A member of the Sikh helpline attended the boy’s house to meet his family. It was explained to the young boy the importance of his education and how counseling and some support would help him overcome his fears. It was also reassured to him that he was not alone and that he had the support of his family and the Sikh helpline to deal with the bullying.

This made him realise that bullying is something that happens to a lot of young children and that there are many options and ways of stopping it happening to him and other children. As a result the Sikh helpline faxed the school explaining the young boys concerns and that of his parents and also reminded the school that they had an obligation to respond as the boy had previously confided in them but no appropriate action was taken, therefore this put pressure on the school and they responded promptly.

The following day the head of year from the school came in person to the boy’s house and took the details of the group who were bullying him and asked him to explain what had been going on. With doing so, the bullies were punished accordingly and serious action was taken.